skip to main | skip to sidebar

Free Preview #3 of Chaos In Boxes "The Modal Brightness Stars"

Here is a .pdf of one of my favourite, proudest musical discoveries: The Modal Brightness Stars!

This is a chapter from the eBook versions of "Chaos In Boxes: twisted adventures in music theory."

Enjoy the pretty pictures... ever more symetry [sp] for the universal mind!

Posted by Sean Luciw at 3:23 PM No comments:

A few weeks ago I started reading about the Björklund algorithm, which is a method of distributing a certain number of items over a certain number of positions. I'll not describe that entire procedure here, as it is easily found elsewhere. The concept can be used to generate rhythms. For example, 5 accented notes over a length of 16 total semiquavers (1 = accented, 0 = unaccented) looks like this: 1001001001001000. As it turns out, this is a fairly common rhythm. Performing these accents with a kick drum (in conjunction with a standard rock beat with snare on 2 and 4) it would look like this:

Alternatively, you could spread the accent pattern over two bars of 4/4 by using a "quaver" grid instead of a "semiquaver" grid:

Alternatively, accents could be performed by snares and un-accents by kicks:

It could also be described as "3 + 3 + 3 + 3 + 4." Shifting can also be applied without any compromise of integrity, and equates to the spinning of a necklace:

The above are all expressions of the Björklund rhythm E(5,16). E stands for Euclidian.

As an anecdotal aside, I remember once upon a party I had my djembe with me and I was trying to figure out how to evenly distribute 5 accents over a bar of 4/4 1/16th notes. I had no knowledge of the Björklund algorithm at that time, but it was pretty easy to figure out anyway. I chose to shift the necklace in such a way that none of the accents fell on beats 2 or 4 to avoid redundancy:

Lately I've been tending away from 4/4 time in favour of more obscure rhythmic adventures. So, when I started learning of the Björklund algorithm almost three weeks ago, it seemed like it would be extremely useful. I went ahead and crunched some numbers. For example, a rhythm in 13/8 time with 5 accents: E(5,13) = 1001001001010. Standard notation looks like this:

For a very "even" rhythm, I wanted to choose a sum that equates to good old 4/4 time, which would contain two of the more obscure prime-number time signatures. In the image above, I chose the number 32 (highlighted in yellow) because four bars of 4/4 time contain a total of 32 quavers - simple, common and even. From the table you can see that 32 is made up by adding the primes 13 and 19. Therefore, the associated Strong Goldbach-Björklund combination would consist of one bar of 13/8 time followed by one bar 19/8 time. The specific accent pattern, not yet established, requires deciding how many accents in each bar. Since I've been using the number 5 a lot, specifically for the next composition for my heavy metal band Volcano Calculator, I decided upon E(5,13) and E(5,19). The result is one bar of 1001010010100 followed by one bar of 1000100010001000100. Volcano Calculator decided our next composition would place snare drums in position 2 and 5, so here is what the standard notation looks like:

This combination of rhythms will sound very odd. However, this is where the idea of "enveloping" the prime rhythms within the "outer" even rhythm comes into play. In a multi-instrumental/band situation, some instruments can play the inner primes while other instruments play the outer even. So, the drums could play a straight 4/4 drumbeat while the guitar and bass play the 13+19 melody ...and/or vice-versa.

There is also the Weak Goldbach Conjecture, which says that "all odd numbers greater than 7 are the sum of three odd primes." This approach lacks the "even-ness" of the procedure above, but rather accentuates more "odd-ness" and supports the assembly of three consecutive sub-rhythms instead of only two. I plan on using this strategy as well... like so:

Posted by Sean Luciw at 3:02 AM No comments:

Thank you to everybody who attended the "Chaos In Boxes" (re-)launch event today... I had a blast talking about all the nerdy number music stuff, I hope you did too! I intend to repeat the event in the spring when the weather's a little nicer. Here are a few photos taken at the gig: 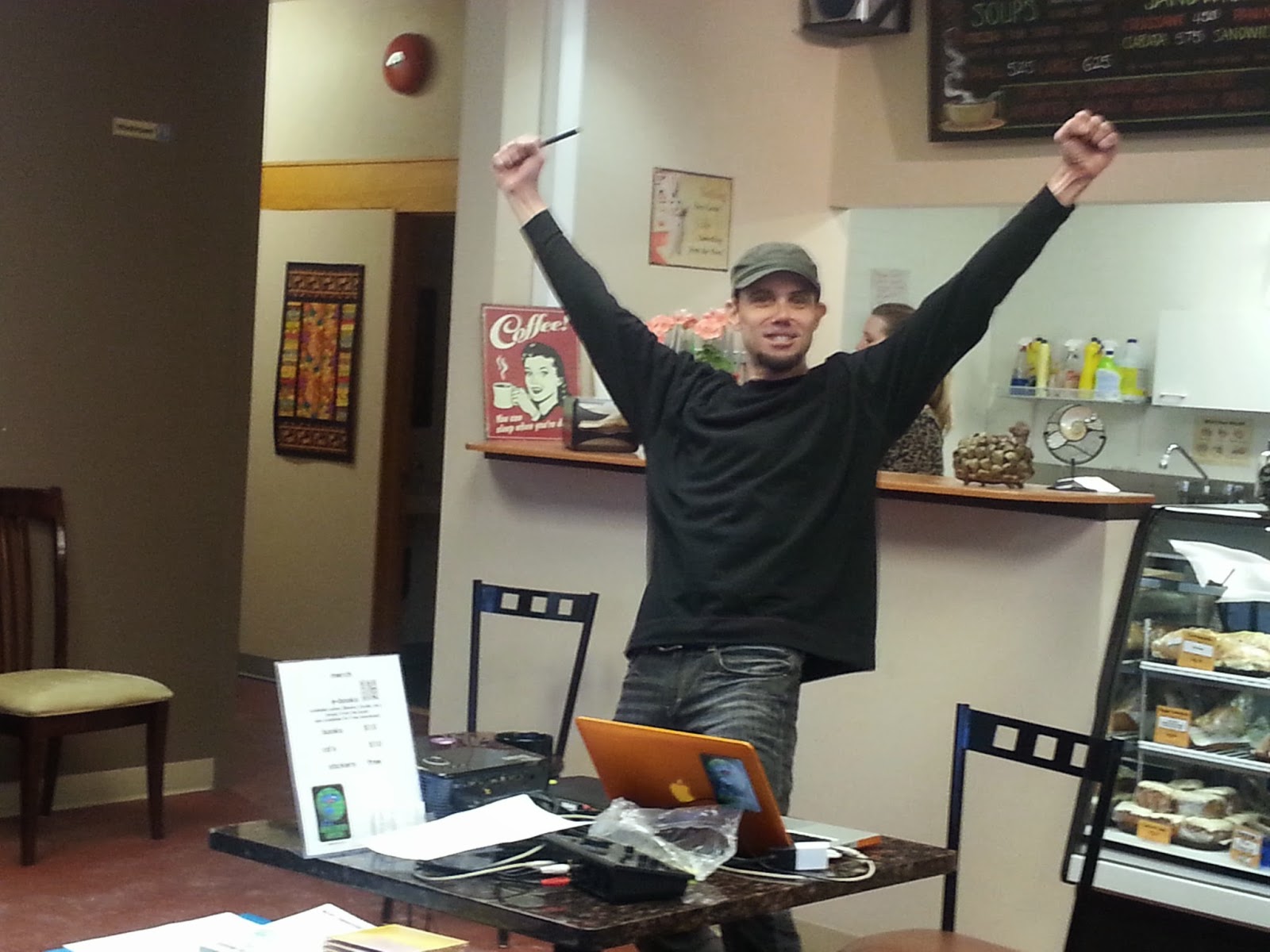 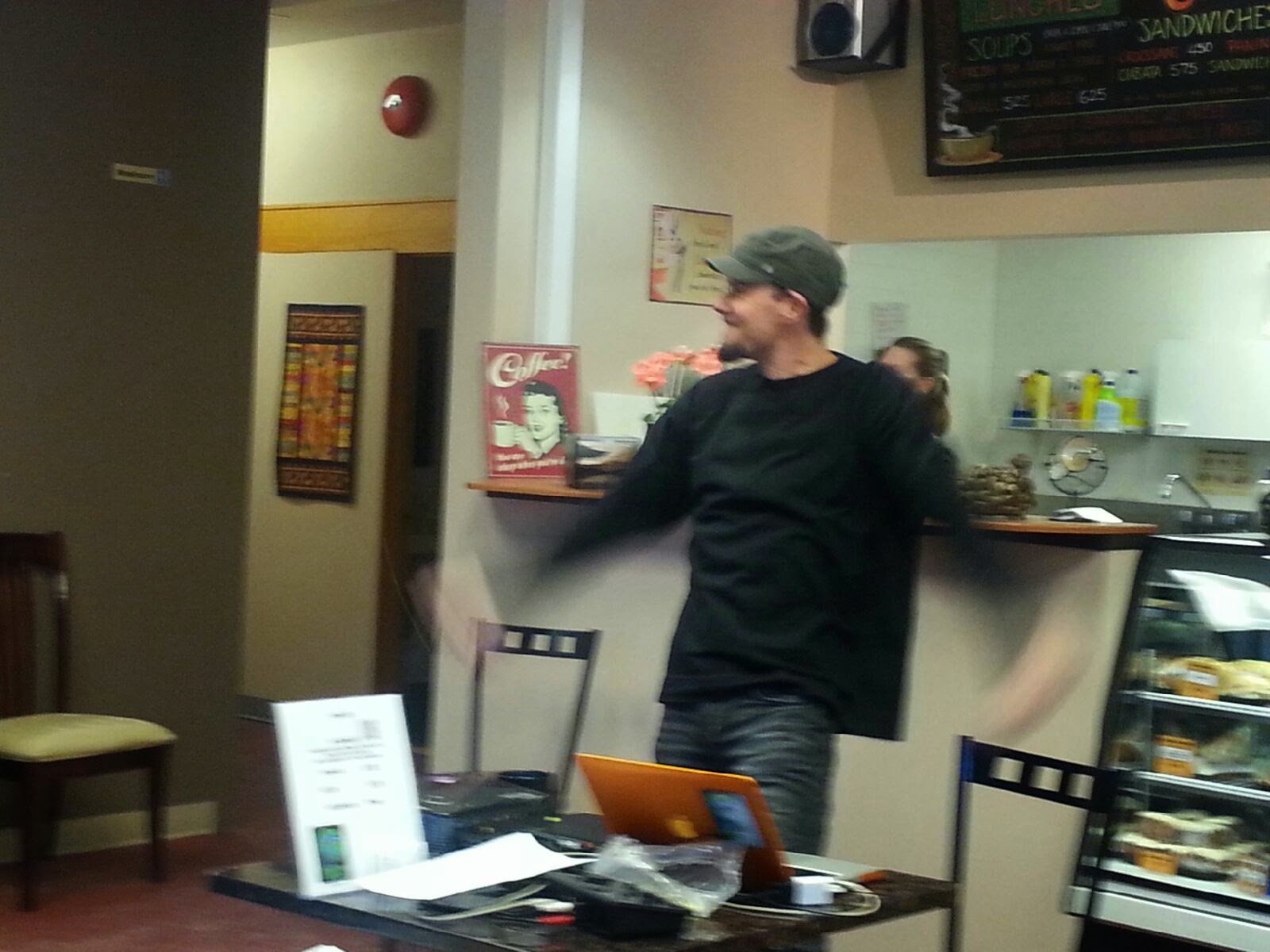 Posted by Sean Luciw at 5:51 PM No comments:

YES !!! Fruition. The eBook Edition of "Chaos In Boxes: twisted adventures in music theory" is now available almost everywhere. It's a fun read, I swear! I've added some new Chapters & Appendices, and if you're doing the iBooks thing, you can enjoy the Enhanced Version with Audio.

Go here to my site, which has all the links:
http://seanluciw.com/Writing.php

Or, here are the links:

Posted by Sean Luciw at 5:18 PM No comments:

Whew! What a journey. Lots of html, css, epubcheck, mobi conversion and other various tech insanity have been happening in my world... In the last year or so I've managed to get all my e-ducks in a row for the new e-book version of "Chaos In Boxes," which should be seeping its way out to all the distributors in the next few days and weeks.

I'm gettin' anxious over here, can't wait for the e-book to drop! I actually think that, if you've read "Chaos In Boxes," you'll enjoy reading it even more the second time with this e-book version. Available soon.

Posted by Sean Luciw at 9:23 AM No comments:

There was a .pdf here but then I deleted it for some reason... Here's a link to it again:

It includes two of my favourite chapters, The Times-Table Mirror and The Modal Mirror.

Posted by Sean Luciw at 3:31 AM No comments:

I'd previously thought that the Melodic Major Scale was equivalent to the bottom half of the Major Scale combined with the top half of the Minor Scale. In other words, Ionian bottom with Aeolian top. However, while pondering tetrachords, it just occurred to me... The Modal Mirror suggests that the Melodic Major's upper half comes from Phrygian, not Aeolian. The difference is not apparent in the interval spelling, of course, since both of their top halves are the same and the bottom half is being covered by Ionian. By extension, Melodic Major could also be seen as Mixolydian bottom, Aeolian top.

A natural extension of this observation is the following procedure: Here it is: From the Modal Mirror, combine the bottom half of each pair with the top half of its partner, and vice-versa. Yes! Another bona-fide legit musical structure unearthed for the benefit of all.

Details for each combo are here:

Some interesting developments indeed. There a couple of double occurrences, and a Wholetone scale appeared out of nowhere! The combination of Aeolian bottom with Mixolydian top, to become the same interval spelling as Dorian, harkens back to a prior notion from "Chaos In Boxes" that Mixolydian and Aeolian are the most closely related to Dorian by virtue of only one interval difference. Furthermore, this strengthened association hints toward the development of an expanded version of the Modal Mirror, one which positions each bottom-top mode combo in appropriate order, emanating from Dorian which is of course the center of the entire symetry. Of course, combo 6,5 is closest to 2,2 on the list, which looks like this:

and whose elements have the following quantities of interval difference from Dorian:

In this ordering system, wherever two Mode pairs have the same interval spelling (and therefore the same amount of interval difference from Dorian or "distance from centre"), the deciding factor becomes the interval contents of each constituent mode in its entirety as opposed to only the top or bottom half that got used in the combo. For example, 3 bottom, 1 top is the same as 7 bottom, 4 top; but modes 7 and 4 are each 3 intervals different from Dorian, whereas modes 1 and 3 each differ from Dorian by only 2 intervals, therefore 7,4 is further down the list than 3,1.

Notice that, since interval pairs appear consecutively on the combo list (ie, 6,5 is followed by 5,6, etcetera), it seems feasible and appropriate to re-order the original Modal Mirror according to each distance from Mode 2. The Modal Mirror has the Mode numbers 1 through 7 in consecutive order, arbitrarily clockwise, around the outside of the circle. The new ordering of the Modal Mirror would have Modes 5 and 6 closest to Mode 2, then Modes 1 and 3 further away, and then Modes 4 and 7 at the far side of the circle away from Dorian. Since the Modal Mirror itself does not distinguish or specify which element from each of its pairs takes precedence over the other in any way (that I can currently recall), the new combo list loses a dimension when interpolated or regressed back to the Modal Mirror. That is, the Modal Mirror does not provide a means of accommodating both 6,5 and 5,6. This could be accommodated by making further enhancement to the Modal Mirror. For example, turn the Dorian mirror line to become horizontal and specify that whichever Mode's bottom appears first in the combo list should be shown above the horizontal, and the other below. 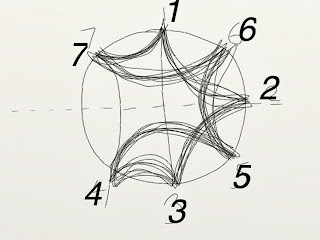 Posted by Sean Luciw at 2:31 AM No comments:

music from the book